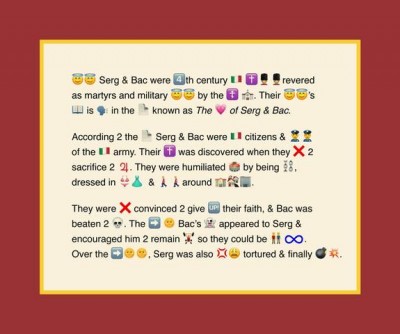 New Icons exhibition by Kalle Hamm  Series of new pigment prints commissioned for the project ‘The Russian Bar’. Forced migration of members of Russian LGBTQ community is one of the matters that is discussed in ‘The Russian Bar’ project. In his series of new prints (or icons as he called them) Kalle Hamm uses emoji language to argue about the relations between homosexuality, gender identity and the institute of church.  The attitude of the Orthodox Church toward the LGBTQ people has varied in different times and places. For example, the early Eastern Orthodox Church had adelphopoiesis unions, which have been sometimes interpreted as a kind of proto gay marriage (1). The Finnish Orthodox Church welcomes LGBTQ people to its community, but doesn’t bless the homosexual marriages (2). After collapse of Soviet Union there was a period of some sort of liberal approach towards gay people. As Kalle Hamm remembers in the Konevsky Monastery in Russia there use to be a kind of asylum centre for gay men living in the region (3).  After 2013 when the ‘anti-gay law’ in Russia has passed the level of intolerance in the country towards non-traditional sexual relationships has increased tremendously. The law has revealed the degree of homophobia in Russian society on the levels of governmental institutions, The Russian Orthodox Church and everyday domestic situations. Not being able to endure the situation of immanent thread queer people decide to leave the country or forced to do so. However, moving to another country with a more liberal society is not a guarantee of inclusion into local LGBTQ community. Starting life in a new country is not necessarily easy, especially if ones belongs to the both ethnic and sexual minority.  In the center of the project there is a tragic story of Saints Sergei and Bacchus who have been considered as gay saints, even though there is no proof of true nature of their relationship. Martyr stories are very often stories about violence against the oppressed ones, and those who didn’t give up became martyrs. The exhibition includes prints of other coupled male and female saints that had gone through suffering by fighting for their rights. Interpretation of the traditional icon of saints Kalle Hamm had written in emoji signs, which is an attempt to update the saints’ story to the modern times and make their stories easier to access. At the same time, it is a welcome sign to all the LGBTQ people to contemplate, how strongly they should fight for their rights to be the essential selfs.

Queer History Month is organised for the first time ever in Finland during 20.10-20.11.2018. The month is coordinated by Seta ry and Culture for All.

All the program for Queer History Month can be found on its webpages. The month also has its own Sateenkaarikuukausi Facebook page where events and information is shared. The program includes for example queer guided tours in museums and shedding light on material that has previously been hidden away. The purpose of the month is to review Finnish history and culture from a queerperspective and include the queer story in our common cultural heritage.

The exhibition is hosted by Culture for All (Kulttuuria kaikille -palvelu / Kultur för alla) at The Cable Factory, Tallberginkatu 1, staircase D, 5th floor, Helsinki.  Exhibition opening hours: 26.10.-16.11.2018 on Fridays 10.00-12.00 and 13.00-16.00, and on request on other days during office hours. Please contact Christine Langinauer if you wish to visit the exhibition on other times at 0403533234.  Accessibility: The office is accessible. For more information on the accessibility of the office, see the About us section.  The exhibition is a part of the project The Russian Bar: Why Relocate? New approaches to neighborliness and interchange. Part 2.