About a Utopia in Helsinki

I thought it´s about time to introduce Utopia Helsinki since in the description of this blog is mentioned that the present blogger is also part of that collective.

Utopia Helsinki has organised in co-operation with the youth department of the city of Helsinki since February 2011 clubs, which have been age limitless, free of charge, queer and accessible for all.
The first three clubs were held at the youth activity centre Happi in Sörnäinen, the previous at the youth house Harju more or less in the same borough in Kallio and the next one - which will be a summer club staged together with the Helsinki branch of SeTa (SeTa is a nationwide LGBTI organization) on 29th of June during Pride-week - will be again at Happi.
Lately there has been discussion about the content and differences between the notions barrier-free and accessible. They manifest themselves at Utopia Helsinki events in the sense that the youth activity centre Happi is already as such barrier-free and the youth house Harju will be made barrier-free with a transportable ramp. In addition to that we have arranged temporary tactile paving for visually impaired and sign language translators who have translated the songs of the performing artists and the "in between yo´s" on stage. So, Utopia Helsinki clubs have really been accessible and not just barrier-free.

Since last autumn Utopia Helsinki has also delivered weekly courses. This was initiated with capoeira classes from September to December held by instructors Mikko Rossi and Eki Valkonen of the capoeira group GCANG Finlandia which was then followed early this year by a Dance Ability -set with Outi Ivaska. There is a multisensual theatre course facilitated by Johanna Röholm still running. Johannas ensemble is preparing a performance for the Cross Over festival held in Suvilahti from 7th to 9th of June.
I myself have about ten years in capoeira and I was at the classes last fall as some sort of co-facilitator. Our multitudonous gang was training movements and rhythms of the afro-brazilian game in a warm and relaxed atmosphere.

Already in the end of the 90´s we organized with a NGO called SUOLA (Suomen lasten ja nuorten liikuntakasvatus) inclusive school sport days in Turku and Jyväskylä aimed for pupils of ordinary primary and special schools. Later in around 2004 I saw an announcement where the Sports department of the city of Helsinki marketed a sport event for disabled youngsters at Liikuntamylly in Myllypuro. It seems gorgeous when special needs of the special groups are taken into account and activities are also arranged for them...
Bollocks. If the so called special groups play bingo only among each others according to the safe, sound and customary scheme, thinking will remain inside the box, nothing will change and prejudices between us will prevail.
This means that "special sports" aimed only for "special groups" means also failing an opportunity for emerging mutual understanding, since sports and motion are anyhow very special and plain ordinary at the same time.

Indeed the same ethos should be lighted up in all cultural action. The rapper Signmark who raps in sign language inspires youngsters to learn his mother tongue, the DJ-course planned for next autumn will be provided with adjustable tables, so that you can turntable from a wheelchair and at a graffiti-workshop all youngsters could freely express themselves.
This is what Utopia Helsinki is all about. In the end, nothing very exceptional, eh?
Utopia Helsinki has got its inspiration from Gothenburg, Sweden where local youngsters were fed up that despite warm words the city was full of separating chairs and artificial borders and limitations. So, they came up with Utopia Gothenburg. Our fellow-Utopian Atlas Saarikoski was there and got the idea to build up a similar thing in Helsinki. The first club of Utopia Helsinki was held then early last year. Well, this is our story so far. 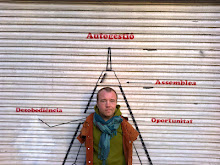